You will receive: a magnificent colored certificate with your name and the data of the plot, a map of the planet with the plot drawn in and a wonderful, lovingly designed information leaflet with lots of info about the universe and your new planet. Don´t miss our beautiful colored gift folder to make your gift complete.

Info: Vouchers can be redeemed at checkout.

Your property claim on Mars | Buy land on mars now

Mars has inspired mankind at all times. In old Egypt Mars was referred to as “Horus the Red“. As the planet moves backwards for a while in its apparent retrograde motion, the Egyptians talked of Mars moving backwards. The name of the Egyptian capital ‘Cairo’ is derived from “Al Qahira“, the old Arabic name for Mars. In Sanskrit Mars is called “Mangal“ (promising), “Angaraka“ (burning coal) and “Kuja“ (the fair one). Mars represents strong action, trust and optimism.

Due to its reddish appearance Mars was associated with deities of war in various cultures. Babylonians saw in him Nergal, the god of the underworld, death and war. For the Greeks and Romans this planet represented their gods of war Ares respectively Mars. In Nordic mythology it stands for Tyr, the god of law and heroic glory. Aztecs called it Huitzilopochtli, the destroyer of people and cities. Buy land on mars now.

Buy a legendary piece of land on Mars with personalised title deed from the original seller. This is supplied to you including an information leaflet of the Martian property and a map with your specific coordinates and marked location of your plot of land. 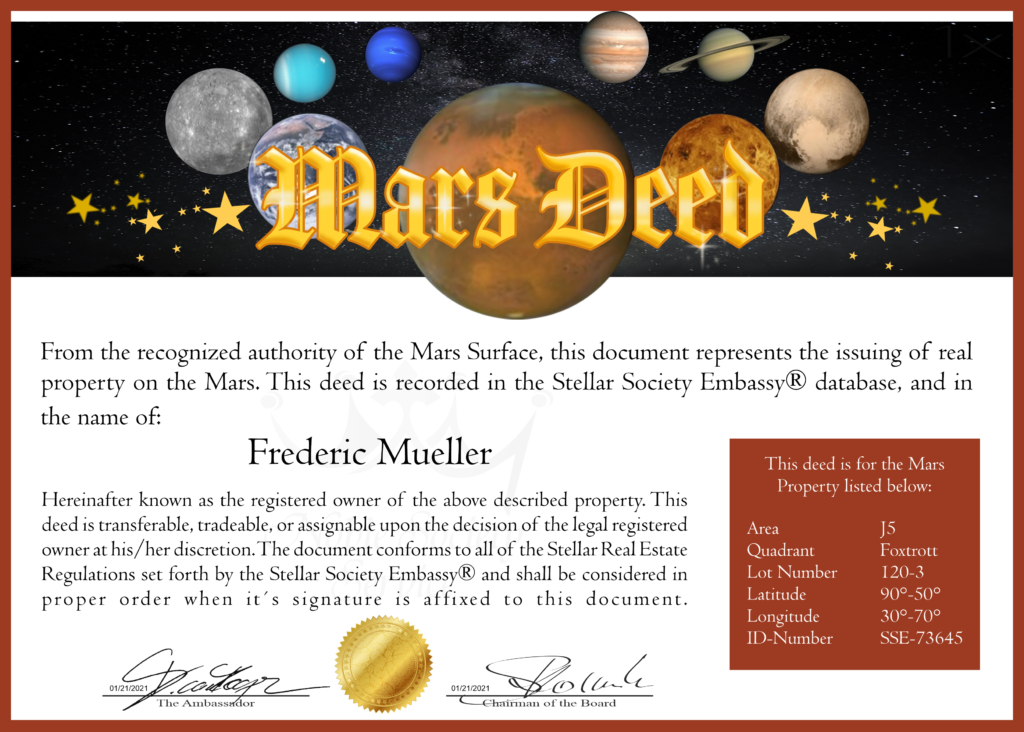 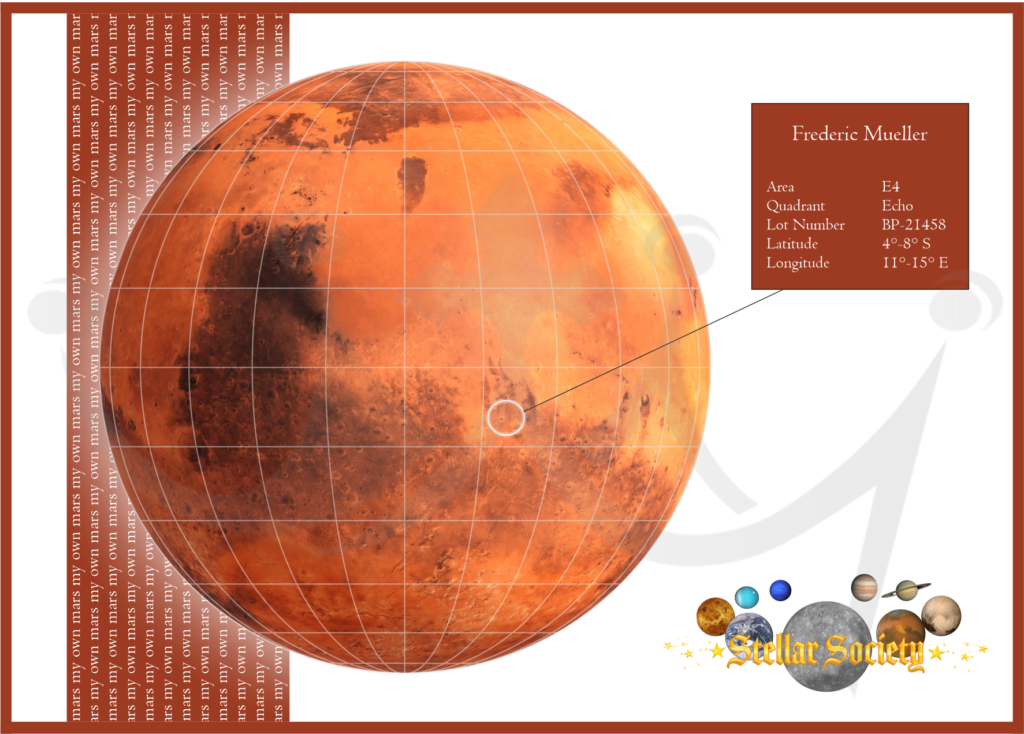 We would like to show you in a few very simple steps how to use your coupon correctly.

The pictures are taken from one of our other sites, but the workflow is the same.

Ready? OK, let´s go to view our cart and check out. 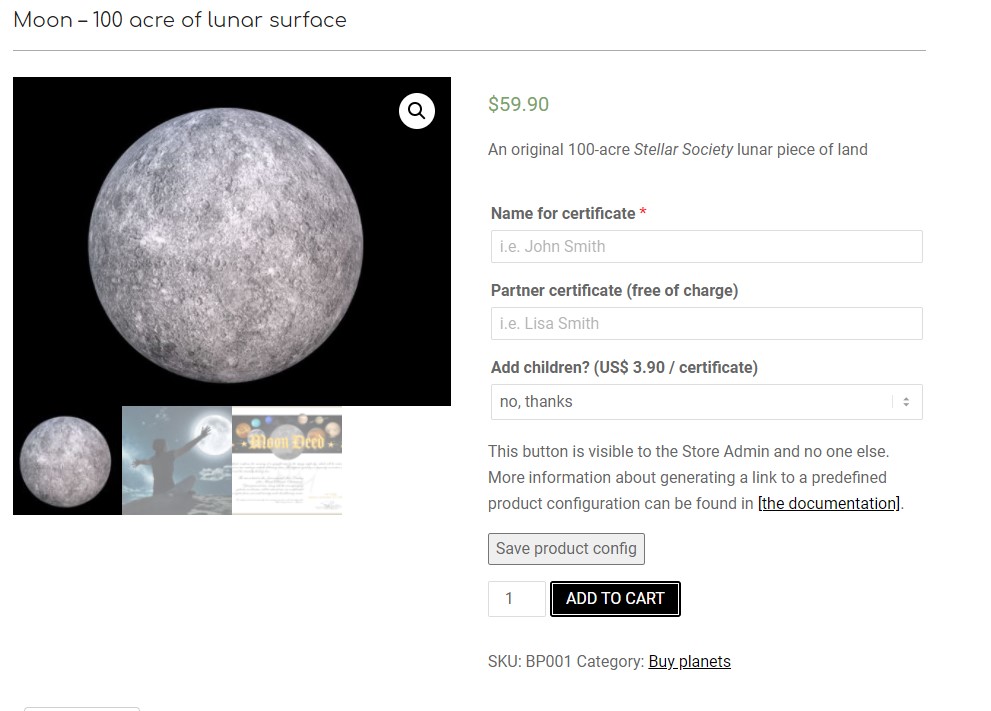 Now we redeem your voucher.

A: please copy your voucher code from Groupons´s website. Make sure, you copy the REDEMPTION code, not the order number or anything else. It needs to be the redemption code. Click on “Apply Coupon”

B: please check now if the voucher value was deducted correctly. It should be 59.90 for all planets, 139.90 for the Triple Package.

C: if the voucher has been redeemed, please proceed to checkout.

At the checkout please fill in your address and proceed to payment. There will be no charge for the certificates (with the exception of children’s certificates, if you would like to order some)

We need to charge for shipping. The certificates will be sent by air from Europe to the USA , where USPS receives the packages and delivers them to you.

Back to the shop 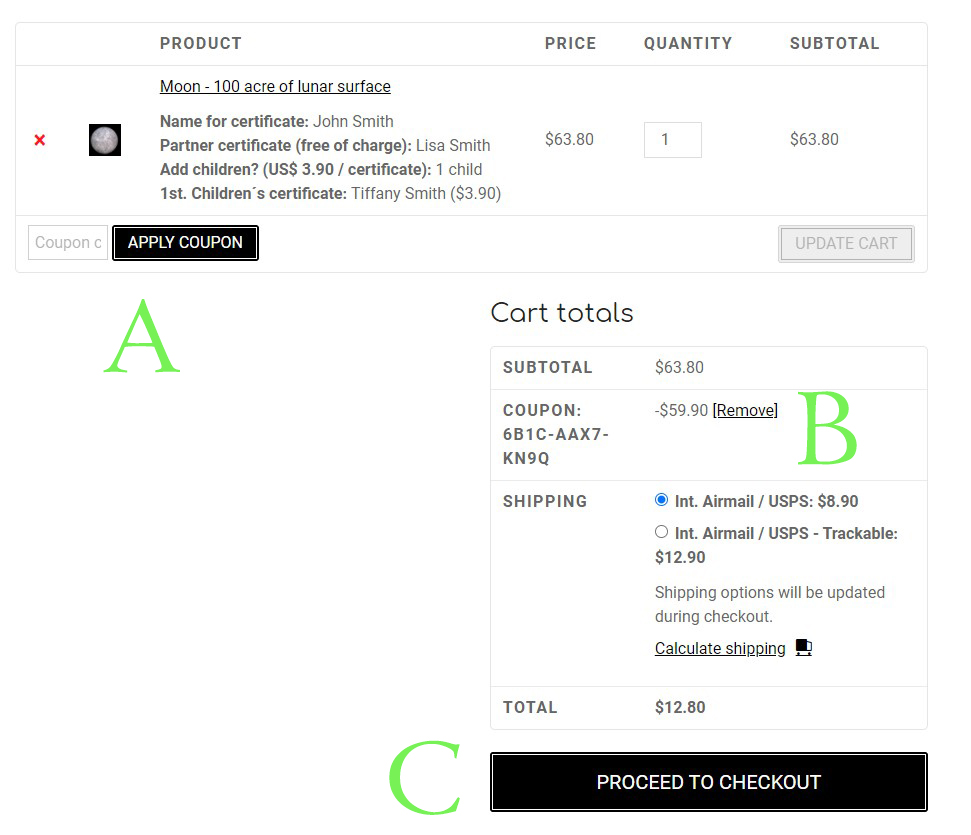